What’s the most common reason for this ceiling collapses? And what evidence should you give your personal injury lawyer if you discover that you have a serious injury due to a chunk of ceiling hitting you?

I believe that one happened because there was a lot of pressure. It was the top floor, and the attic was improperly maintained. There was a lot of pressure, so the whole thing collapsed. Usually, it’s just a portion where you have the crack or where you have the leak. The important thing to remember with ceiling collapses is that you need to prove notice. There are three ways to prove notice. Number one, you can show that you did complain to the landlord and the management company and that when you complained, they didn’t fix it; they didn’t remedy the situation properly. And then, after a certain period, the ceiling collapsed. Had they listened to you, had they listened to someone in your household who made the complaint, who told them, “Hey, there’s a leak in my ceiling. There’s a crack in my ceiling. This is dangerous,” had they fixed it properly, then this would not have happened.

That’s known as actual notice because you actually notify them. Now, the second way is constructive notice. If you just look up at the ceiling and you see a crack, and the crack exists, or the leak exists. It has existed for some time, such as six months, three months, a year, or a period, and even though you may not necessarily complain to the landlord, the fact that it exists should tell the landlord, especially if it exists more than a year. Because in New York City, landlords do inspections once a year of apartments, they should be able to find it, and they should be able to fix it through one of these inspections when they go there and look. How come they didn’t fix it?

Just the mere fact that it exists, that’s known as constructive notice because it exists, it’s dangerous. If you would’ve seen it, then you should, using reasonable care, find it and fix it. If you didn’t, then it’s your fault as a landlord, and as a manager. The third way is if the landlord or the management company or the defendant, maybe it’s a construction company, is the one who created the collapse. Now, if they’re doing some kind of work, let’s say above you, if you’re in apartment 3A and they’re doing work in apartment 4A above you, like plumbing work. They’re doing it negligently, and the plumbing isn’t done properly, and the plumbing leads to a leak, and then that leads to a ceiling collapse, well, now you could sue the landlord, the management, and the plumbing company. The plumber for causing and creating the condition because they’re causing and creating the danger, the ceiling collapse that is happening by their work.

Those are the three ways. Actual notice when you complain, constructive notice when the issue has existed for a long time or caused, and create when the defendant creates the condition. The more proof you have, the better. If you’re going to complain, it’s good to complain in an email or in a text message and then save that as evidence. Because if you just say, “Yeah, I complained.” And then they’ll say, “No. No, you didn’t. Look, we have a log book. It’s empty.” Because, invariably, these defendants always find a way to say, “No. We don’t have something.” It’s very rare. In all the cases I’ve handled, hundreds and hundreds of cases, probably even thousands of cases over my career, I rarely see the defendant admit like, “Oh, yeah. The plaintiff complained.” I think one time I remember them having it because it was typed up, and they had to turn it over. It was typed up.

He had the plaintiff complain. But for the most part, they always say, “We didn’t get any complaints,” even if you do complain. “We don’t know anything.” They like to bury their head in the sand. “We don’t know anything, we didn’t see anything, we didn’t hear anything,” like when the ostrich buries its head in the sand. That’s what they like to do. You need to keep records. Keep the records. If you’re going to complain, do it by email, do it by a letter, do it by text message, and then save the screenshot, save the email, save the copy of the letter, whatever you’re going to do. That way, you have proof that you did complain, and it’s actual notice. What are the typical injuries, and what are the lawsuit values you can see with ceiling collapse? They vary.

One of the injuries that you do see is a neck injury because when the ceiling collapses, it could hit you in the head, obviously, and that could cause a neck injury, such as a herniated disc. When the disc is inside the cervical spine, the neck will rupture, and then the liquid inside the disc, known as the nucleus polyposis, will leak outside the disc and then hit those nerve roots. There are a lot of nerves. There’s the thecal sac, then nerves are going… For example, in the neck, the nerves will travel, and then they’ll travel… Known as brachial plexus nerves. They travel to the shoulders, they travel to the arms. If you’re having, let’s say, arm pain or hand pain tingling in the fingers, that could be due to a herniated or bulging disc in your neck because the neck pain will travel or radiate to the arms. That’s known as radiculopathy.

One of the ways they can test for that is by doing an EMG. It actually listens to fibrillation potentials and waves. It’s conclusive evidence that you have this nerve impingement and this radiculopathy radiating pain. That’s one of the ways. EMG, also known as NCV, is nerve conduction velocity testing. A physical therapist usually does that along with MRIs, which are magnetic resonance imaging, which will just show… They won’t show all the nerves, but they will show the disc injury, the herniated disc. If you have that herniated disc, then you start your treatment. One of the treatments you may get is epidural steroid injections, a percutaneous discectomy, ablation, a rhizotomy, and different types of pain management procedures depending on what the doctor thinks and what your symptoms are. If it doesn’t go away, then one of the things that people get is full-blown surgery. A percutaneous discectomy is a surgery, but it is minimally invasive where a striker decompressor type procedure will remove the leak from the disc, but it’s not as invasive as a full-blown anterior cervical discectomy and fusion.

There, the entire disc is removed, and then, usually, a titanium plate is put in and there are screws put into the vertebrae, which is the bone. That’s much more serious. We had a case with the ceiling collapse and the lady did need a full blown fusion. That case settled for nearly $2 million. I believe it was 1.75 million. That was a recent case in Brooklyn. We’ve had other cases of ceiling collapses. Right now, we’re working on a few cases with ceiling collapses where there are fusion surgeries. Those, you have to build up the injury, of course. Like in any case, you have to build up the damages, the human story, the medical proof, as well as the liability. I would say. Generally, the liability is a little bit easier because the ceiling shouldn’t collapse in the absence of negligence. It really shouldn’t happen.

It’s not necessarily a res ipsa. Some cases are res ipsa, meaning the thing speaks for itself. This just cannot happen without negligence. Ceiling collapses aren’t always resed ipsa, but they’re fairly easy to prove because, usually, you fall under one of those three categories of notice, and you just get as much evidence as you can. You have photos, you can get the repair records to see what they had to fix after the collapse. The liability is usually not the issue. Sometimes, what the defendants will do is they’ll argue that, “Yes, there was a collapse, but it was minor. It was just like a little piece of the paint or the sheetrock. It wasn’t anything that could hurt you,” and that you’re malingering, you’re a faker, and you’re claiming all these injuries, but the collapse did not cause them. So then you have to get your doctor to give you what’s known as medical causation and testify and say, “Well, I’m a doctor. I’m the treating doctor. I’m a specialist. In my opinion, with a reasonable degree of medical certainty, this ceiling collapse caused this particular injury.”

And then you have that rebutted. Once you have that medical testimony, as long as that is believable and the jury believes you, you have a much stronger case, and then you can win your case in court because the defendants will, of course, call their doctors, which are the IME or DME, the defense medical experts. But remember, those are defense doctors, meaning they always testify for the defense for the most part. They’ve hired guns, and, no matter what, they’re going to say that the ceiling collapse does not cause the injury because the defense is paying for them. They’re being paid for by the insurance company and the defense lawyers. They are like they’re hired guns. You don’t really expect them to say anything more. But often, they’ll do these exams, and the exams will be so quick, like a minute, two minutes.

Of course, if you show all the evidence from your treating doctor, who’s treated you all along from the date of the incident up until the trial, and you compare and contrast that with somebody who’s seen you for a minute, then, obviously, you have the strength and all the evidence on your side and you’re going to win that case. I hope this has been helpful. Let us know what other questions you have, and maybe we could do a little bit of a deep dive into ceiling collapses. I could review some of the verdicts and settlements that have been going on in New York City in the last few years, and then we could talk about specific cases and we could talk about some more cases that we are handling. Let us know what questions you have. Please like and subscribe to our channel. I’m going to be doing a few lives soon, so you can just join me live and ask questions in the chat.

I’ll try to answer your questions live so that we interact more, as opposed to just doing these videos. That’ll be a little bit better, I think, because we can answer client questions, and then, later, that’ll give me more ideas for videos. That’s also something that you feel free to comment on and leave us your ideas for future videos so we can create better content to serve you and that could help you. Okay. I hope this has been helpful. Let us know what other questions you have. Have a great day, and we look forward to speaking with you very soon. Bye-bye, everyone. 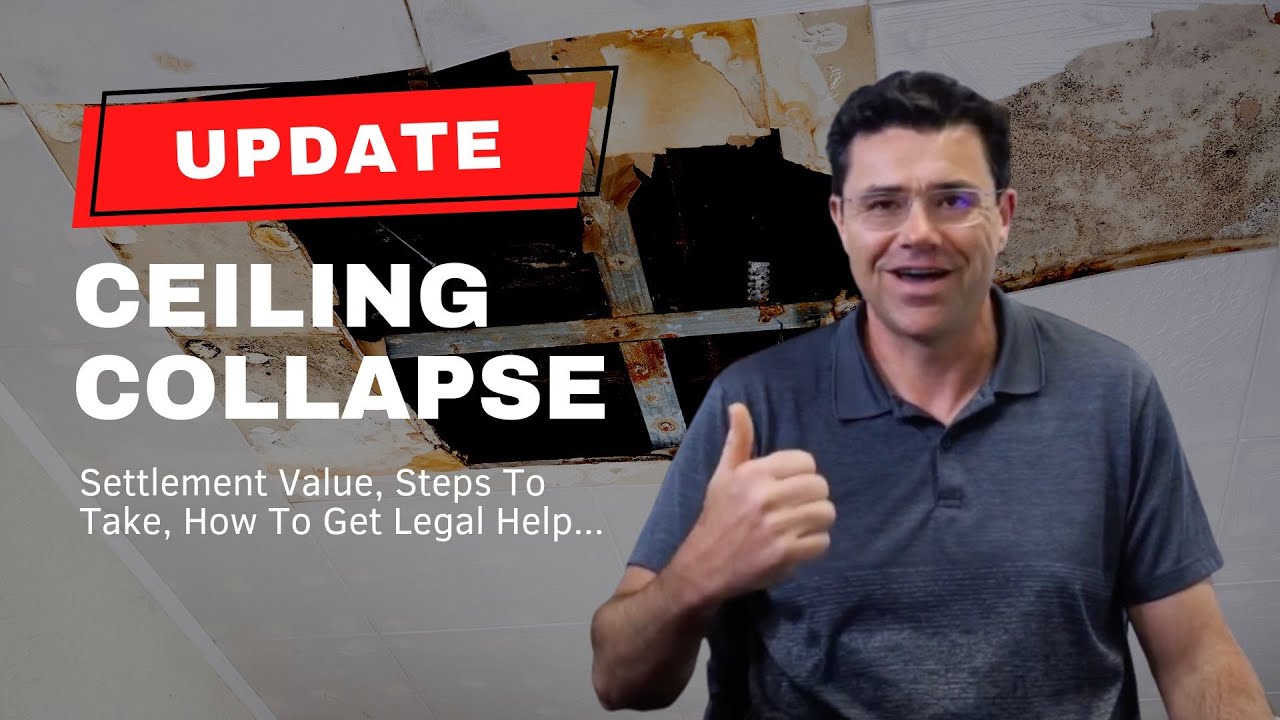