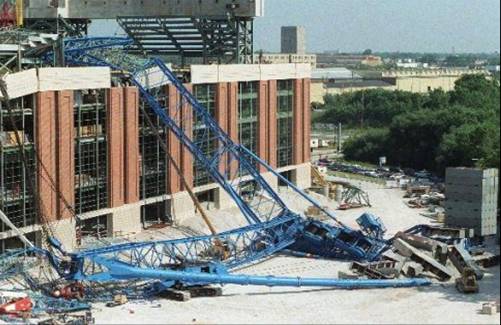 New York City remains one of the hottest construction markets in the United States.  In fact, as reported in Construction Drive, commercial and multifamily construction outpaced every other city in 2015. “The total dollar value of all construction projects initiated in the five boroughs reached $40.9 billion in 2015, a jump of 53 percent from 2014 when construction starts totaled $26.7 billion and more than double the $19.9 billion in starts realized in 2013,” according to Real Estate Weekly. As a result, a concurrent rise in construction accidents has accompanied the  construction boom, and crane accidents have played a role in that rise.

Frekhtman and Associates crane accident lawyers see the layers of complexity, especially with crane involvement in construction accidents.  In the case of the crane accident in lower Manhattan recently, just blocks from 1 World Trade Center in Tribeca, the crashing crane injured three people and killed another.  The massive 565′ crawler crane, owned by Bay Crane, toppled under windy conditions, as the operator, Galasso Trucking and Rigging, sought to secure it. Multiple equipment owners, contractors, and sub-contractors were involved, from the actual crane operator to the those who rig the crane, to those securing the area.

Due to the high-profile crane accidents, the city has hired more inspectors, but even the additional oversight has necessitated a closer look.  Permits issued and Building Department Inspectors are wrapped up in the complexities of this accident.  Couple the totality of these actors with insurance rules in the state of New York, such as third-party-over action, where liability exists beyond worker’s compensation when third-party actors contribute to an employee’s injury, and a web of responsibility widens.

If you have been involved in a crane accident and need experienced lawyers to secure your rights, contact lawyers at Frekhtman and Associates.