What makes a bad case in a personal injury? Who is responsible? Who is at fault? Who is liable? All those issues are discussed in this episode, enjoy!

Hi everybody, this is attorney Arkady Frekhtman, and today we’re talking about bad cases and what makes a bad case. It’s either the issue of who is responsible, who is at fault, who is liable, or it’s the issue of damages. What are the injuries? What is the life-changing, serious or catastrophic injury that you’re trying to get compensated for? And so, usually, the answer to one of these two questions will determine whether a case is good or bad.

But some cases are just really, really bad, and there’s nothing anybody can do. And I think it’s educational to explain why from a legal perspective so that people can understand how a lawyer thinks because a lawyer will ultimately is trying to guesstimate what the decision will be, whether there’ll be a settlement or a judgment, a jury verdict, what will happen, like a prognosticator, like an estimate what will happen, the prognosis of the future. And so sometimes, the lawyer could be wrong. The lawyer could say, “No, I’m not taking that case,” but it ends up being a gem, and some other lawyer takes it and wins a million dollars. That can happen.

We’ve had cases that other lawyers have rejected. For example, there was a case where somebody slipped in a supermarket, and another lawyer said, “I am not taking the case because I don’t believe you can win on the issue of notice.”

But I think the first lawyer just didn’t do a deep dive. He didn’t interview the client properly. We interviewed the client, and we found out the client had witnesses that saw the same puddle earlier. And so, using those witnesses, we proved notice. And then we ended up settling the case. And I think it was pretty significant. It was like 275 or $300,000 because that client needed arthroscopic knee surgery. So that’s an example of what someone thought was a bad case, but it really is not a bad case. But today, I want to talk about really bad cases. These are cases that I think any lawyer would think are bad. Maybe somebody out there would be able to help, I don’t know. But let’s start with maybe the number one bad had case of all time that I’ve ever had, and that is a call.

It’s actually not a case. It’s just a call. But it was a call from a taxi driver in New York City. He called us and he said, “You know what? I was stuck in traffic, and I’m a taxi driver. I was in the car by myself, and I couldn’t get out, and I had to go to the bathroom, and I’m stuck in traffic, so what am I going to do?” And I look over on the seat, and I see there’s like a Snapple bottle. it was only a fourth of the way full. “I urinated in the Snapple bottle, it was a few days, and now I have this severe infection, and my private parts are infected, and I think it’s related.” I think that’s a really bad case because first of all, who will you sue?

You’re going to sue Snapple for causing an infection? And it’s really, really weak on the issue of causation because there’s no way you will show that that infection, whatever it was, was caused by the bottle. Plus, there’s the issue of you purchasing the bottle, the bottle is meant for drinking. It’s iced tea. It’s not meant for using it as a toilet. So you’re not using it for its intended purpose. And furthermore, the bottle could have gotten infected because you chose to keep it for so long. It was just lying around in your car; it was in the summer. You might have had it in the car for a week before. So it could have gotten infected or contaminated then. So you can’t really say, you know what, I’m going to sue Snapple. I don’t know who else you could possibly sue for something like that.

And so that’s an example of a bad case. Other examples of bad cases, usually from what I’ve seen, they usually are examples of cases where there’s some kind of contributory negligence or comparative negligence. That means that the plaintiff, the person who’s suing, was also at fault or they engaged in an activity that was dangerous. For example, I did a case where there was a kid, and he got, unfortunately, he got really hurt. He had his leg broken and that was because they were doing this class in a gymnasium, and the gym teacher said, “You know what, I’m going to put a soccer ball in the middle. And both kids” were actually many different classes. Some were like fifth graders, but some were like eighth graders. And our plaintiff was a small little kid, and then there was this big kid.

And they said, “Okay, you guys from like, I don’t know, 20 feet apart away from the ball. You’re 20 feet on the left, you’re 20 feet on the right; run towards the ball, and whoever kicks it first wins.” Some kind of game like that. And so the big kid ran a little faster, our plaintiff got there too. But instead of kicking the ball, the big kid kicked his leg, and he really shattered his leg. He had a bad injury, and the case was dismissed on summary judgment. And then we took it to the appellate division, and we tried to argue, “Well, why did the teacher create this game? This game isn’t safe.” But they said, “You know what? It’s spontaneous. It’s spontaneous, and nobody could predict that this would happen.”

And they dismissed the case. And I’ve noticed that with skiing cases. We’ve had cases with skiing where our plaintiff was just going traversing the slope slowly, but someone else was racing down and crashed into him. And we said, “Look, he’s just traversing the slope.” But they said skiing is just risk the activity. You have to have a heightened risk to sue. But even that, they don’t really look at these distinctions. They just dismiss everything. So that got dismissed too. That was a bad case. And a lot of the bad cases that we see are just cases that we don’t take, like, for example, the Snapple case. And there was another one too where somebody said, I don’t know, for some reason all the bad cases have to do with people’s private parts, but this one was funny, a little bit funny also, it was something with an ultrasound that he was saying, “I have an ultrasound. And I think the ultrasound of my testicles caused some kind of injury,” but there was no proof of anything.

And we had just to say no because with medical in our practice cases, it is a little bit different than most cases. After all, you have to show number one that the doctor did something wrong, that there was a mistake, that the doctor deviated or departed from good and accepted medical practice and that they made that mistake. And two, that mistake is what caused the injury. So in a case like that, it’s just not, and plus, what’s really the injury? They were saying a little bit of some kind of swelling or something, which an ultrasound really isn’t going to cause anything like that. So these are just some examples of bad cases.

We’ll probably make a list of other cases, and if there are any interesting stories out there, I’ll do another video, and I’ll talk about them, but I don’t mean to do it to mock or shame or make fun of anyone. I do it in order to educate you so you can understand what the issues are. If it’s an issue of doing a risky activity, like soccer or skiing, if it’s an issue of not having any liability or fault on the part of the person, you’re trying to sue, or sometimes you just don’t have anyone to sue. You could have a good case, but unfortunately, there’s just nobody to sue. If you have a landlord who owns a building, but he doesn’t have any insurance, and he has some kind of asset protection, and there’s just nobody where their house is in foreclosure, and there’s just no one to go after.

Or in some states, some people are driving cars, and they have no insurance or they have very minimal insurance, like $10,000. There’s just nothing to go after. There’s no pocket to go after. So that happens, unfortunately.

So I hope this has been helpful, but that’s one of the things we have to deal with as lawyers. We make ourselves available. We say text us, email us, give us a call. We make ourselves available. And that’s one of our jobs is to look through all the cases and choose the ones where we could truly help you and handle those cases. Okay, I hope this has been helpful. Let us know what questions you have. Have a great day, and we’re here for you. Bye-bye. 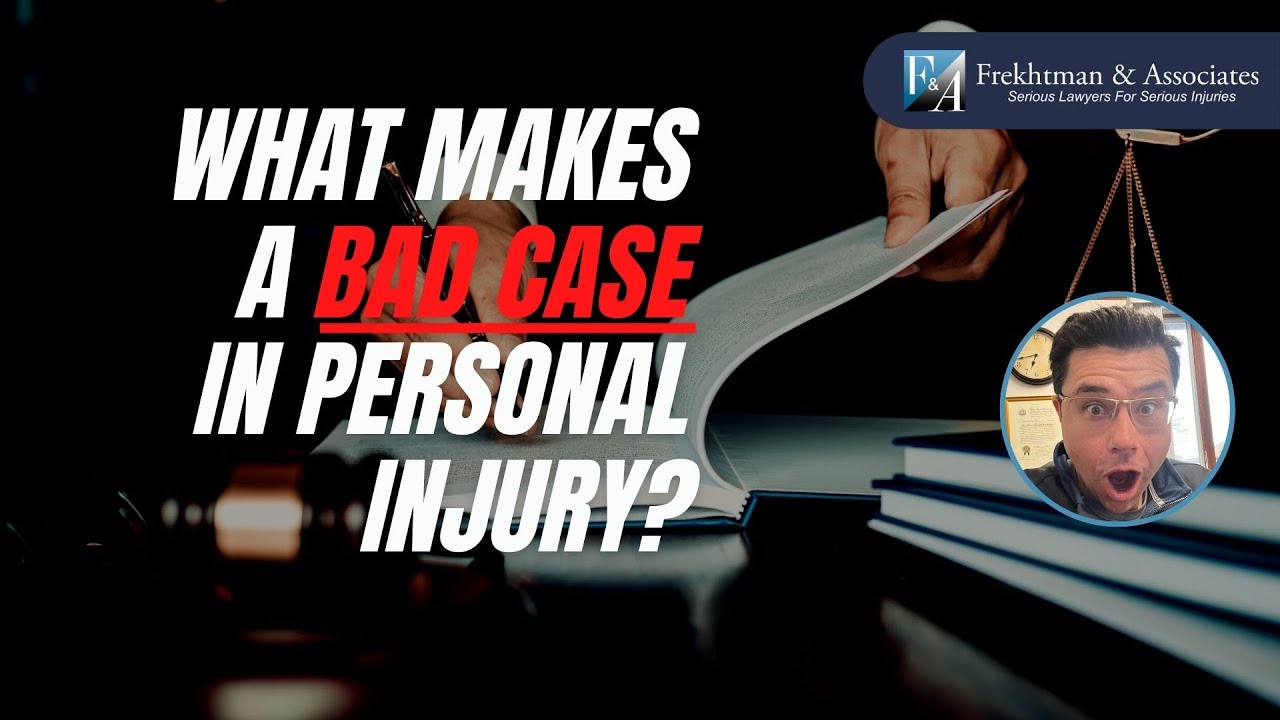