Well, number one, I think it’s important to talk about what to do after a ceiling collapses. It’s vital as a victim or a survivor of the ceiling collapse in your apartment or in your house to document and take photos of what happened. So it’s important to take photos maybe from different angles, some close-up, some a little bit further away for context. Measurements if you can. If you are injured as the victim, maybe somebody else can help out and do that, take the photos while you get medical care.

So that’s very important because sometimes what we’ve seen with some clients is that they suffer a ceiling collapse, and it’s definitely the landlord’s fault because the client would have complained about let’s say a ceiling leak or a crack in the ceiling before, but the landlord just doesn’t fix it. Then after the ceiling collapses, the landlord offers, “Hey, I’m going to fix everything. I’m going to come. I’m going to clean everything up.” They show up quickly. They clean everything up and now there’s no evidence that this ever happened. Then later, if you’re in court, the landlord could even deny and say there was no collapse or it was minimal and lessen the reality compared to what it really was so that you would only be able to recover much less compensation. So it’s very important to document the scene.

The other question people ask about ceiling collapses is who pays, right? Does insurance cover it? Who pays for the medical care? Who’s going to pay me? What is the ceiling collapse compensation? So with respect to this, there usually is not any health insurance with respect to ceiling collapses. So if a ceiling collapse happens and you are injured, you would need to go to the doctor, and then you would need to use your health insurance. Now, if you don’t have health insurance, some providers and also working with an attorney can sign what’s known as a lien or a letter of protection. This would allow you to get your medical care for free now. But then in the end, when you win a recovery and obtain compensation for your pain and suffering, you would have to pay back the provider for their services.

So for example, for doctors giving you treatment, diagnostic testing, whatever the care is, and you just run up a bill, like a tab, and then maybe it’ll be like $5,000. Then at the end of the case, if you win a larger amount, like 100, 200,000, you pay back that $5,000 for their services. So you would need to know a doctor who’d be willing to do this because a lot of doctors don’t want to do that, right? Because what if the case is lost on some legal technicality or if the lawyer or the client just says, “You know what? I don’t care about the case anymore.” It’s kind of like they’re doing you a favor by agreeing to this.

But there are some situations like if you have health insurance, you could just use your own health insurance, whether it’s Medicaid, Medicare, private insurance, Oxford, Blue Cross Blue Shield, whatever it is. Some apartment buildings may have, or some insurance policies that ensure either houses, apartment buildings, even commercial complexes, they might have what’s known as a med pay portion, a medical payment portion of the policy. Usually, it’s small, like five or $10,000. But they would then pay for your medical care up to the limit, which is like five or $10,000. That’s pretty rare. But we have seen that sometimes.

Then people also ask like, how should I deal with the landlord and the management company after a ceiling collapse? Well, as we said, it’s very important to document the scene, take photos. You could let them know that it happened. If you complained before, you can memorialize those complaints, either in writing, in a text message, in a letter, whatever’s easier. It’s always good to have proof that you complained because saying that I complained to the super or to somebody from management, somebody from the landlord, just saying it verbally, they might say, “No, you didn’t.” ow it’s like he said, she said. So it’s good to have it documented.

Then really, once you hire a lawyer, if you don’t have to speak with them anymore because once you hire a lawyer, they technically are not allowed to speak to you about that case and all communications should be done through your attorney. So then at that point, communication will cease and you don’t have to deal with the landlord and the management.

Then the most important question that we get is what are the case values? What is a ceiling collapse case worth? Usually, that turns on two different factors. Number one is a fault. Can we prove that the landlord or management company, the owner of the building, and the manager of that building were at fault, were responsible for the ceiling collapse? Usually, with ceiling collapses, it’s fairly easy to prove fault or liability because usually, it’s like a big stain, it’s dripping. There’s a crack. There were complaints made before. Or the super came in and they didn’t do a good job. They just patched it up. Or they stuffed some newspaper or they stuffed something, some kind of filling into the ceiling rather than doing a proper repair job and so that caused it to collapse.

But of course, each case is different. There are a lot of different reasons ceilings collapse. Each case is unique, but those are some of the common elements. It’s important when proving liability to prove. So for a ceiling collapse, it is very important to prove notice. Notice just means that you notified the landlord or management company about the ceiling collapse. You told them, you wrote to them, you emailed them, you texted them, any kind of notice that there is a problem. Then they may be said they would fix it, or they just accepted your notification and did nothing or they try to fix it but didn’t do an adequate and satisfactory job. Then sometime later the ceiling collapse.

Legally, there are actually three types of notice. Number one, there’s actual notice when you actually tell them, “Hey, my ceiling is in bad shape. There’s a crack, there’s a leak. Please do something.” There’s also constructive notice, the fact that your ceiling is in bad shape for a period of time, even if you don’t complain, right? So if I see a crack in my ceiling, I don’t say anything to my landlord, but some time passes, like a year, and in that year, the landlord comes and does an inspection, like an annual inspection of my apartment. Now I can argue, “Well, you must’ve seen it during the inspection. It’s been there for more than a year. A reasonable landlord would do something and you should have done something.”

Then the third type of notice is when the landlord or management, the responsible party, the defendant, caused and created the condition. So for example, if they’re doing some kind of work in Apartment 2A and they’re hammering and jackhammering and whatever work they’re doing in the floor joists causes the ceiling in Apartment 1A below to collapse. They caused and created the condition. That is also a form of notice.

But ultimately, value, you have to consider liability. Then ultimately, the value really turns on the issue of damages. Then the issue of damages really answers the question, how has this ceiling collapse changed your life? How has it affected you, right? So what are your pain and suffering? If you have a little injury where you get a few months of treatment and you feel better, that case may be worth 20, 30, $40,000. If you have a serious spinal injury where you may need a percutaneous injection or an epidural steroid injection, an epidural case might be worth up to 100,000. A percutaneous case may be worth up to 500,000.

If you end up having spinal surgery, like a spinal fusion, laminectomy, discectomy, you could be approaching a million or even beyond. We settled up a ceiling collapse case with a spinal fusion for 1.8 million, nearly $2 million. So it all depends on your damages. Those damages can be economic, such as lost wages, future medical expenses, and things like that. They could also be non-economic, meaning just your pain and your suffering, and what is that worth because your life has been affected so much.

So what we do there is we get all your doctors together. You tell your story about this has affected you. You have your medical proof. You also often get to get circle of friends and community witnesses to talk about what kind of person you were before the collapse and how after the collapse happened, your life has changed, now it’s a completely different life. Then you can show those two different roads or pictures and then that usually is compelling for a jury to allow for a large amount to compensate for pain and suffering.

Then people also ask, how can a tenant settle a ceiling collapse case? Really, the best way to settle this is to contact an attorney because it’s free of charge. We don’t charge you anything. We only charge a percentage of whatever the recovery is. So if we win 100,000, the client gets 70. But from the beginning when the client retains us up until the end, maybe like a year later, because it takes time to prosecute the case, all that is free, right? All our work is free. Coordinating your medical care, keeping you updated, getting you the best in class medical care, everything is free.

So the tenant’s settlement, it’s very hard to do it on your own. I don’t even know-how. I’ve never heard of it… Sometimes in auto cases, people do get settlements on their own with the insurance company directly. But it’s usually just a few hundred dollars, right? With apartment buildings, especially in New York City, it’s very rare to do it on your own. So it’s always best to do it through an attorney. Especially since it’s free, it makes sense. The attorney will get you much more value than doing it on your own. I mean, we’re talking like 10X, 20X, 100X than you would ever get on your own.

So those are really the important things to remember when dealing with the ceiling collapse case. Keep the evidence, just take photos with your cellphone. Try to get the complaints in writing, some form of writing, email, the text is fine. Then remember that value is really based on medical care and how the event affected your life. Okay. I hope this has been helpful. Let us know if you have any questions and we’ll be happy to do some more videos about ceiling collapses as well as other topics. Okay. Have a great day, everyone. Bye-bye. 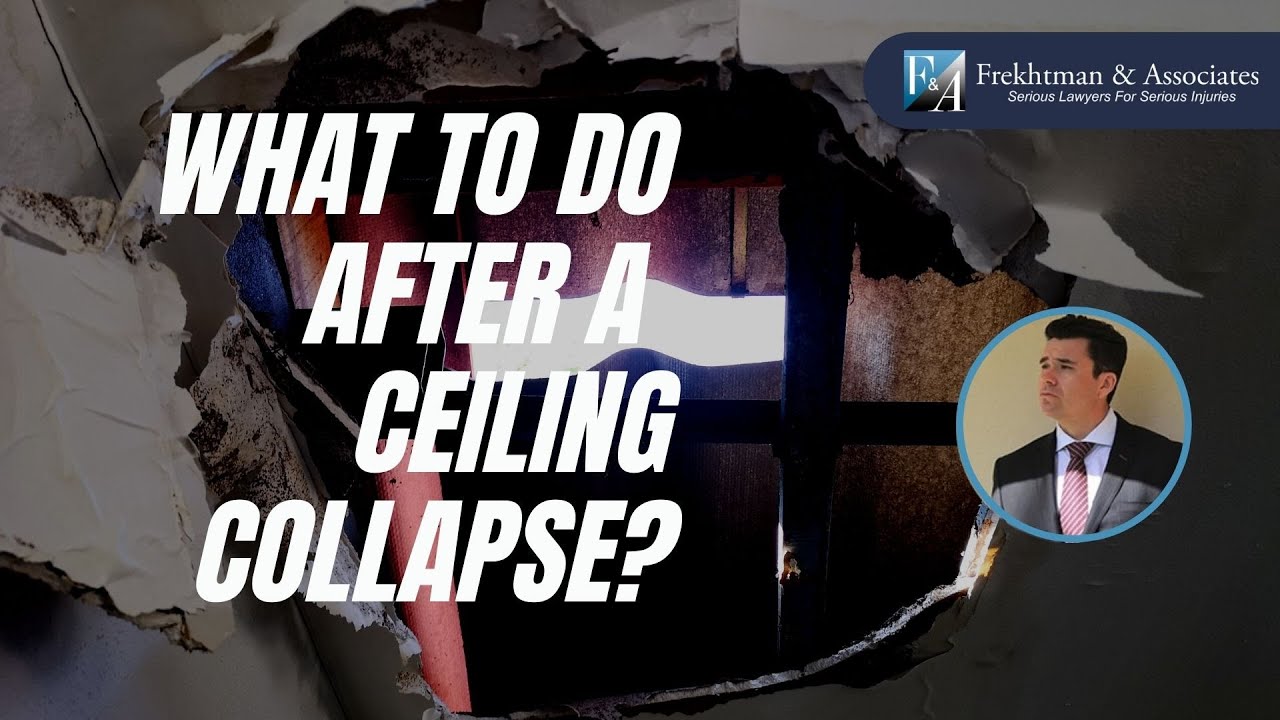