At least 17 people, including eight children, are dead after a five-alarm fire in a residential high-rise building in the Bronx on Sunday, Was It Preventable? Investment Portfolio v. People’s Lives

Good morning, everyone. This is Arkady Frekhtman, a New York personal injury trial attorney coming to you on Monday, January 10th. And recently this past weekend in New York City, we had a tragedy, a fire in the Bronx claimed 19 lives, including nine children with 60 people injured. And as an attorney, sometimes I’m always curious, well, what caused the fire? Even though obviously the first question is what are we going to do for the survivors? How are we going to make them safe? They started temporary housing, I think across the street at a public school and they’re starting up a fund to take care of them, which is very noble and admirable.

But for me, as an attorney, I always think about what caused it, and what they’re reporting in the news is that it was caused by a malfunctioning electronic space heater that was used in addition to the heat in the building. And it malfunctioned. Then it started a small local fire in one of the apartments. And because a door was left open the fire spread, and I believe the Fire Commissioner, Mr. Nigro, said, “Well, we always tell people, we always tell people, close the doors. When you leave a room, close the doors. If you see a fire, close the doors. And I guess people may be in a panic, they can’t necessarily know what to do. They get panic, they run out.

And the other issue with this building was that they had a prior history of faulty alarms. So means the alarm would go off and it was a false alarm. So this incident that happened this past weekend was kind of like the boy who cried wolf because the alarm went off and people just thought, well, it’s another time the alarm goes off because this is always happening in this building. And they stayed put, and that’s why it was worse than normal.

But when thinking about this case, and I did a little bit of research just on the building and thinking about this case, I thought there were a few points. And number one, it was the fact that there was a law in July of 2021 passed that all apartments and stairway doors, meaning the public halls, the stairwells in the public halls have to be self-closing because if they become self-closing, then it’s safe, right, because the fire won’t spread. At least the fire will be contained. And the building said that they were self-closing, but obviously something happened because this fire spread and it was a horrific event.

And there were prior fire safety issues with this particular building on East 181st Street. For example, there was a failure to follow gas leak procedures. And they had a housing and preservation development violation for this fire safety issue back in 2017. And that’s available on the DAP portal, which is a public portal that anyone can access.

And so the building is owned by all these companies. One company is known as Bronx Phase III Preservation, LLC. Another one is the LIH Investment. A third is the Belverton Partner. And a fourth is a Camber Property Group. And so, one of the things I was immediately thinking from reading the articles and doing a little research is that this case really shows the difference between the owners and managers of a property. First of all, a property should not have so many managers, right? Who’s the manager? One of the tenants said, they’re changing managers like they’re changing underwear and that’s dangerous, right? Because what are they doing? How are they looking at this property? All of these financial guys are looking at this property as an investment portfolio, the same you would, if you had a stock portfolio or a cryptocurrency portfolio. But to the tenants, this is not about money. This is about their life. This is about safety. This is about their children.

So I think that’s a big dichotomy that’s going to play out in this case, or in many cases, I see that in many cases that I’m litigating, whether it’s a slip and fall, whether it’s a ceiling collapse, whether it’s a fire accident or a burn injury. We’ve handled a lot of those in the Bronx and in Brooklyn and in other parts of New York City. And I think that’s a big distinction because what happens is the reason that these investors… And this building was bought for $166 million in 2020 during the pandemic. And it was bought from actually Donald Trump’s father by all of these financiers. And why do they buy it? They buy it because the tenant is going to pay a little bit of rent, like a few hundred dollars a month, but Section 8 federal subsidies are going to kick in. So they get guaranteed money from the federal government. And it’s part of the Mitchell-Lama project. So they get more money from the federal government, the state government, the city government.

And I see that so often in so many cases, these shelters, affordable housings. And what happens is they get the money, of course, and then they just kind of keep in the pocket the money and they spend as little as possible on safety, right? They spend as little as possible on the tenants, the people that are actually living in these buildings. And I think that’s deplorable. What there has to be is some kind of oversight, some kind of financial audit to say, hey, you got $100 million. How much of it was spent on self-closing doors? How much of it was spent on sprinkler systems, on alarms that actually work? Because otherwise… And in one of the cases, I actually spoke to a witness and he said, “A lot of these companies, they’re cooking the books. They’re just writing down that they spent money on safety and in reality, they’re just pocketing it.” It’s just like your mind would explode if you know what’s happening in some of these buildings. So I think it’s really, really important, that’s the second point, that you can’t do that. You have to use the funds for safety.

And the third point that I think of when looking at this entire issue is the fact that they’re not really updating the building to stay current with the times. There was another fire in Manhattan, I believe around Avenue A Alphabet City. And that was a New York City Housing Authority building. And somebody plugged in those electric scooter lithium batteries, they plugged many of them into one outlet. Now, of course, that’s dangerous. And that could be partially or completely the fault of the person who did it, right, the tenant.

I’m not saying it’s not, but how do you have only one outlet in, let’s say, a studio apartment where the tenant is precluded from using another outlet because there simply is not one? And in today’s times, we know kids like those electric scooters or those hoverboards and all of those. A lot of products use lithium batteries. So then the money you’re receiving from all these subsidies, whether it’s the city, the state, the federal government, maybe use some of that money to update the building so that the people are safe. I think that’s very, very important. And that’s what happened in the other case.

So that’s basically… And then going back to the cases we’ve handled, like we handled the case in Brighton Beach, Brooklyn a few years ago where a young man, a fire was started in a neighboring apartment. And it was also started because of too many appliances being plugged into one outlet. And in that case, we actually proved that the electrical work in the buildings, this was a one-family building or two-family building actually, but a small building that was being rented out. And so what happened was the landlord jury-rigged the electricity instead of hiring a licensed electrician and getting all the permits, he kind of did it himself. It was an old building from the 1900s and he just jury-rigged everything. So we were able to show that his work was negligent and we were able to settle that case for a significant amount, over half a million dollars.

And then in another case in the Bronx, we had a very similar case where a space heater was right up against a mattress and a baby was burned. It was a local fire that started, the fire was going on, but it didn’t engulf the entire apartment building. It just was confined to one apartment where that space heater was up against the mattress. And, of course, like always they blamed my client. And in that case, to be honest, to be completely brutally honest, I think my client was partially at fault for putting the space heater so close, but we were still able to prove that some of the faults dealt with that outlet, we hired an expert and we were able to settle that case for, I believe $450,000.

So just something to keep in mind, these are just my thoughts, my reaction to this tragic fire case in the Bronx. And I’m hoping that sooner or later, hopefully, sooner some change can happen and we can look at this… These are people, these are human beings, and we shouldn’t treat them as a portfolio or an investment. We should really… And the government who’s paying this crazy money, like 100 million to this company, 400 million to that homeless shelter, 100 million to another one should really audit and see where their money is going and make sure that safety protocols are in place and that the people running these affordable housing units are following all the latest technology because the times are changing. It’s not 1900 anymore. Come on, let’s get with it. Okay. Have a great day, everyone.

Get Legal Help in New York For A Building Accident 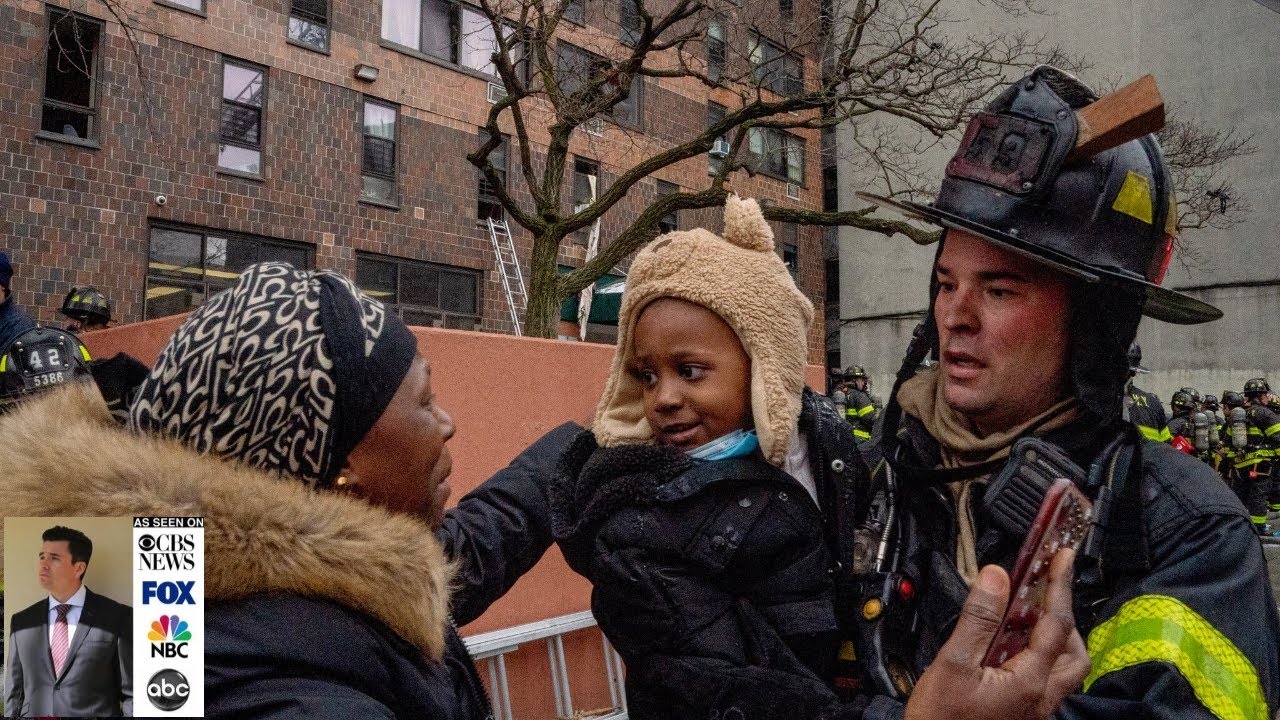